HaRoooo Y'all.
Well, me and maw went to da Doc's office to have my furry first checkup on my hippy. 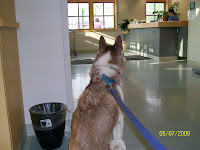 Here I is in the main waiting area. We were a bit early but Maw likes to make sure we is der on time and woo nefur know how traffic gonna be. 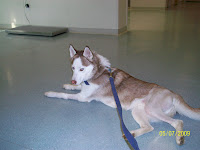 So, I jest decided to chill out fur a bit.

As I was waitin' I got a bit vocal. I saw dis pretty wittle black lab. She was so furry cute. Maw would not let me go woo her.

Den we git called to da exam room.
I's had a special wittle gift bag for Doc and his helpers cause dey was so furry nice to me whilst I was here. Dey was chocolate lollipop paws! Hope dey liked dem. 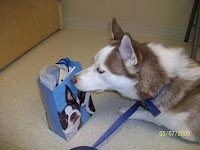 Den da vet tech comes in. She come to remove my staples dat in my hip. Der was 5 of dem. They were a wittle ouchy when she took dem out. But I was a brave boy. 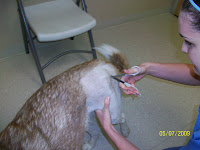 Woo! Who comin' in next? 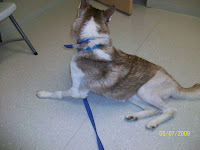 It's da Doc! He heads straight for my hip! Dis is serious business. He moves my hip and leg around. He is furry happy wid how it is healing. He likes dat I is going fur walks and gittin' back to my routine. He sees dat I can even put my wittle foot down sometimes on tippy toes. 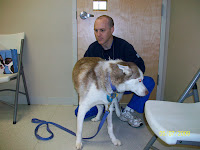 He tells Maw how to exercise my leg even more. I even tell him I git Mee-ssages from Maw. He is furry furry happy wid me. Tells me I is a good boy.

After we is all done, I gives him a kiss to thank him fur helpin' me feel much better. We git to see him in one month. 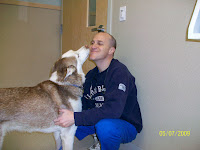 Well, we will keep efurryone posted on my rehab.

Woo is such a sweet boy! I am furry glad the hip is healing!

We are so furry happy you hippity hip is getting better. We hope you hair heals up real quick like. It is nice you and the doc are buddies. You gotta be able to trust that one.

We are so proud of you for doing such a good job with the vet, and for getting better so quickly! Keep up the good work
~puppy kisses~
-Kira The BeaWootiful

THAT'S the voice I rekhall so furry well!

I'm sure this all will make fur a grrrrreat mother's day fur your special mom!

That was furry nice of her to take pressies to the dokh and his peeps!

I think I saw Joey/Doofus/MakhkiePoo on the bag!

Keep up the good work! Woo need to be ready to play with me again someday!

Awww, woo are so thoughtful! Your vet must be a furry good vet cause your healing up so nicely & so quickly! (Of course woo have a great nurse-mama too!)

Great news that things are progressing so well. Keep us posted.

And awesome tantrum in the waiting room. Nothing like drawing attention to your human

We are SO glad your hip is getting better! How sweet of you to give the doc some lovin'! I'll bet he just loved that!
I like to talk in the waiting room sometimes, too. Mom always LOVES it when I do that. Ha roo roo roo!
Tail wags,
Storms

Ohhh Biloxi, your voice is so nice! I think your human should have let you see the other puppy. Maybe next time. :)

Flurry and I are soooo happy that your hip is healing well!

You sound just like me when I get excited! Mom calls it my Hyena sound!

I'm so glad your hip is healing so nicely! You are very lucky to have such a great vet!

You tell them Biloxi! You should get to say hi to labs!

I'm so glad the doctor is happy with your healing!

great to hear you are doing better - sorry your mom wouldnt let you go see the puppy.

That's really good news. We are all v pleased for you. Cross husky hugs sent your way.

WOO Biloxi! Maybe now that the staples are out of your hippy hip your mom will let you say howdy to the other pups next time. We are so glad to hear woo are healin up so good!!