HaRooooo Y'all,
Here are more of Maw and Pa's vacation pics.
Deese are of da National Museum of the United States Air Force in Dayton, Ohio.

Looks like der was sum pretty cool old airplanes dere. Dey has sum from da days of Wilbur and Orville Wright when dey first started tryin' to fly like da birds. Don't woo think da arms would git pretty tired from flappin' dem all day to try and fly all around?

Dis is a special 50th Anniversary Commemorative Quilt of the US Air Force. Can woo imagin jest snugglin' in dat thing on a cold winter night. Dat could be furry snuggly.

Also, dis here is a tribute to a great entertainer, Bob Hope. Dis was way before my time. Maw said he was a great comedian and she loved watchin' him on TV when she was a wittle girl. Dey had black and white TV back then. Bob Hope traveled to many countries to entertain our American Troops. Dat makes him a furry special man who brought many smiles to da boys far from home.

Sum of dem is furry huge. How many huskies can fit in one of dem?

Since Maw and Pa were wid a special group, dey had a furry special dinner at the National Museum called "Dinner Under the Wings". She said it was one of da best dinners dey had.
There was an honor guard to present the colors before dinner. It brought tears to her eyes. Just awesome.
Dey also had entertainment by a small Air Force band. 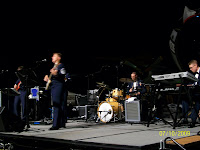 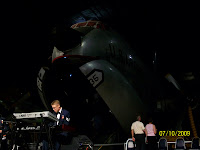 Deese are 2 videos Maw took. Sorry if dey is dark but the lighting was a bit dark in da big museum.

Rusty says he is sure he could fluff that quilt into the perfect sleeping spot with his claws!

Just imagine how much fun their group would have had with WOO running around in there!

Just wait until Steve and Kat show their mom these pikhs!

Thanks for sharing, Biloxi! Our mom and dad love that kind of stuff!
Play bows,
Zim

Still no mention of your presents from their vacation!

My mom has been to that museum. She thought it was really cool.

Hey Biloxi there's a present for you on my blog today!

Dinner under the wings sound really cool! HuMom loves that kind of stuff

That looks like a wonderful vacation - too bad you didn't get to go too.

Pee Ess, thanks for visiting our blog, we are going to add you to our Google Reader so we don't miss out on your posts.