Well we has still been purty busy doin' stuff again fur the past week or so.
On Saturday, Maw took me to the Hike n Howl held at Tyler State Park in Newtown, Pa. It was not too nice of a day cause it rained off and on and a bit cloudy.
But dey had a purty good turn out wid all da people and all dem huskies, and a few udder kinds of dogs too! 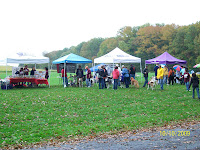 Dese are sum of da tents da rescue groups had to sell all kinds of stuff like sweatshirts, bracelets, stuffed huskies (not real ones), treats, leashes, collars, toys, etc. 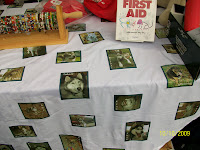 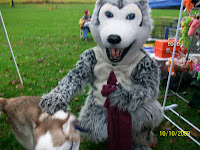 Maw wanted me to pose wid dis giant husky but I turned away from him too fast. Maw couldn't git me to stay wid him fur too long. He did have sum interesting smells on him but I had better things to inspect whilst I was there. 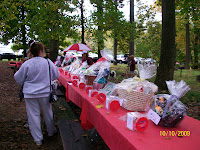 Dis here was a nice table filled wid all kinds of baskets wid toys, treats, special stuff fur da hoomans. Dey call dis da rafflin' table. You gotta buy tickets and hope woo win sumptin'. I would rather jest take da basket and go on my merry way but Maw says it's a way to raise money for da rescue groups so it helps pups like me git saved. 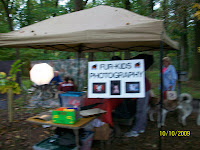 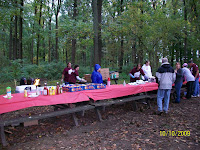 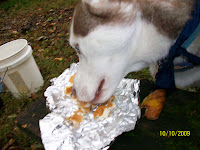 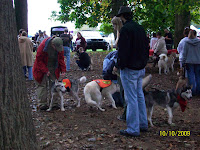 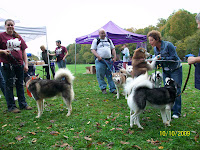 I gots to meet lots of doggies. Dey was all furry nice and well behaved. I think dat little girl on da left side wid da orange scarf, her name Casino. Ain't dat a cool name! 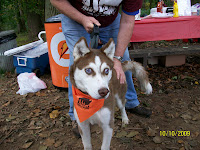 Dis cute wittle guy's name is RJ! Isn't he handsome! He jest got adopted by his foster family! Dey jest loved him so much dat dey wanted to keep him. Way to go RJ! Maw fell in love wid him too. I think Maw has a thing fur us reds. We are jest so unique.

Since we got to da festivities a bit late, Maw took me fur a wittle walk along the trails. The park was furry nice wid all da leaves changing colors. It also let me stretch my legs a bit cause it took us over 2 hours to git there. 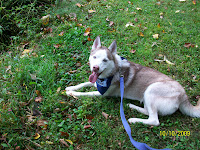 And here I is taking a wittle break from our walk. It was furry beewootiful and we had a great time. I am hopin' to go next year again. 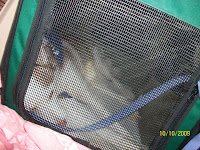 As woo can see, I was one tired pup on da way home.

What a great hike, getting to meet all those pup friends and walkies. But veggie burger? Where's the beef?

It was toooo funny!

Mom and I were watching your furst video - she was thinking how good woo were walking and then YOUR MAW SAID THE SAME THING!

I mean, I've known woo since woo khame North to Pawsylvania! Woo are doing sooooo furry well! It is making my mom leak just seeing that!

We are sorry we khouldn't make it but I needed Mom to be able to get those four sweeties I shared on Monday to safety!

Pawtastic! You must be having loads of fun, by the way that veggie burger looks delicious..!

Thanks for sharing your day with us!

Woooos! A veggie burger? Oh well, the tastes of the young.... sigh....
I hope you had a great time and got lots of other treats too! Yummmy!
-Kira The BeaWootiful

We sure wish we could have gone to the Hike N Howl! So many of our friends were there! Did you get to meet my twin brother of a different mother - Harley!?!? He's like me only super-sized! Woooo!
Great pix, buddy. And we just LOVED seeing how well you get along now!
Luv,
Dave

You look pretty exhausted in that last picture. What a day! It looks like you had tons of fun.

Looks like a fun day for the pups and the peeps. Wish we were there too, we would have eaten the bun for you:) Did you win anything from the raffle?