Hi Y'all,
Boy these weeks sure are goin' fast! Faster than those guys doin' laps in Nascar!! Go JG!!
Anyway, Maw says I should introduce da family. Maw did all these pitchers. Hope y'all like 'em. 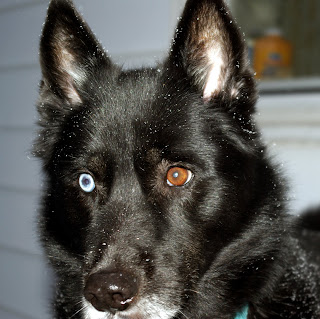 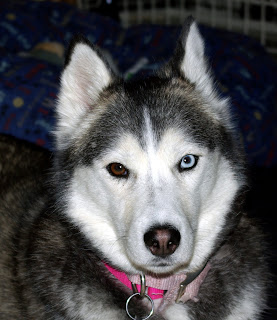 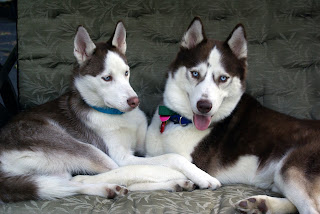 Me and Nikita. Maw says it's Brotherly Love

The other 2 pitchers are of Maw's other senior furkids who crossed the Rainbow Bridge in July within 2 weeks of each other. Maw says their "paws will remain on her heart forever". And she believes that Nikolai and Misha had opened the way for Maw and Paw to gives me and Nikita a loving fur-ever home. 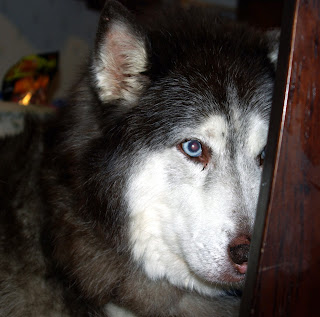 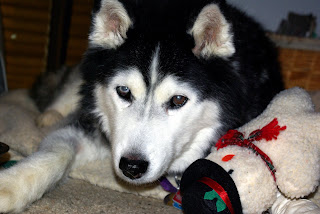 Maw and Paw have adopted all of us furkids from shelters, or they came as strays, or from a rescue. Maw says she has been blessed with so many woo-derful Sibes. We just "melt" her and paw's hearts.

Well, it's bedtime. Maw says I needs my rest. I am still a growing boy. Maw thinks I did get a little taller. But she wants me to takes care of my hips. Maw even gives me mee-ssages now. I just lay my head down and soaks it all up. But of course for the pitcher I has to look my best. 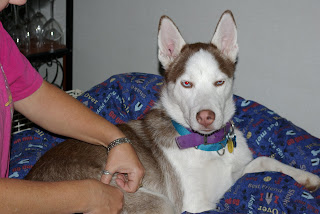 Husky kisses to y'all

That was nice of woo to show off your new kin!

It is always diffikhult when our people's pets khross BUT it does pawmit them to welkhome others into their hearts and homes!!!

I mean, look how lukhky woo and Princess Sunshine Meadow are!!!!

Enjoy those meeeeeesages from your maw!!!!!

What a great family! And you are making yourself right at home there! You have found a great furever home, and we are so thankful that you are blogging so we can keep in touch with you!

Looks like things are going great in your new house. Mom and Dad are looking forward to seeing you at the Hike N' Howl in about 2 weeks!

Wooo, thanks for stopping by. And you are right, you and Rusty look a lot of like in the face, though it looks like you are probably taller.

Woo look so cute in them new photos!!! I'm sure the little girl puppies would loves to be urs girlfriends! When our friends decides which ones to keeps we'll makes it official! Or did woo want to have all of thems as urs girlfriends?

Those are great pictures of your sibs, and the sibe-sibs before you.

Nikita must be like me. He is a boy dog with a girly name. Why is he called nikita?

Thanks for sharing your family with us! Your Mommy and Daddy are the BEST! We are so happy that you have such a wonderful forever home!
Hugs
Thor and Marco Polo

Oh, ma-sasges are the best!

Thanks for showing us your family! I know you and Nikita are helping to heal your family's hearts after losing Misha and Nickolai so close together!

Your people are so PAWSOME, rescuing all their doggies!

Pee Ess We are still working on catching up after taking a week off blogging. The Girl says, never again! Wroooooo!

Your mom must be a great massage person because I don't know if I could have sat still for a massage when I was a little guy!

Woo Biloxi - a furry nice family. Wow - lots of bi-eyed pals there! We are sorry to hear about the woos who passed to the bridge earlier in the year... they sure had a long and happy life in a great furever home. We hope your hips are OK - WOO are sure growing to be a handsome boy!! But keep milkin' it for those massages!